While cannabis has been legal in many forms since October 2018, this fall will see the legalization of cannabis edibles, and with it a real interest in weed-infused beverages.

Constellation Brands invested billions in Canopy Growth as they move forward to producing a cannabis drink, and Coke briefly flirted with the idea of a CBD wellness concoction while others develop new technologies and methods to create them.

The largest issue facing many of these brewers is that cannabis drinks available in Canada through the black market don’t currently taste very good. Most are downright bad.

There are a collection of methods used to create drinkable THC, which is harder than it sounds. THC is not water soluble and home baking methods typically have it cooked into butter. This allows it to bind to the fats, but not something that lends itself easily to beverages.

There’s also the use of tinctures, a method where alcohol is used as a medium, however, this is likely to remain outside of legal products since no government north or south of the border is willing to allow cannabis to be served mixed in with booze.

The solution many companies are turning to is emulsion, a process in which the cannabis extract is coated in a substance that will mix with water. The same process is used in other food and beverage products. Nano-emulsion takes it a step further, using even smaller emulsifiers to coat the extract.

Technology in this process is progressing but doesn’t offer a quick fix for the problem of taste. The solution may be found from members of the alcohol industry.

“All of our flavourists have created national brand liquors. So there’s a lot of work that goes into making them taste just as bit as good,” says Jeff Maser, CEO and founder of Tinley, a California company that’s listed on the Canadian Securities Exchange and creates products using a nano-emulsion technique. “[We] actually use the same flavours and essences and oils that can be found in some national brand liquors, so we can give consumers some of the same experience, but with a cannabis effect instead of alcohol.”

The main concern with edibles of any kind seems to come down to dosing. Canada’s preview of edible regulations put a 10mg cap on THC dosage but Maser and his company have shot below that, making something that those familiar alcohol can relate to.

“All the drinks are 5mg per serving. The read to drink cocktails are 5mg per drink and then the hard liquor concepts are 5mg a shot,” he told Grow.

The only real difference, according to Maser, would be the telltale bite of alcohol. 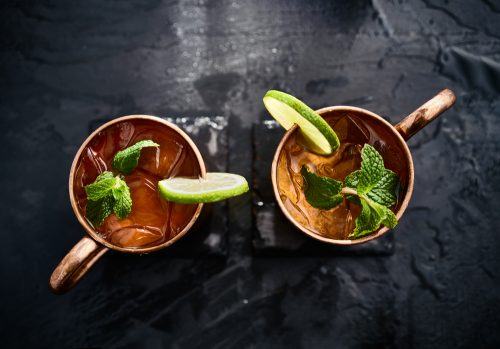 “We have a cinnamon whiskey, an amoretto and a rum inspired products,” he said, “and we have a margarita and Moscow mule-inspired cocktail. They all taste pretty much the same as the actual products.”

Tinley only has products on shelves in California — the “world’s largest beverage market,” according to Maser — but is eyeing an expansion into New York, Nevada, and Canada. While tight-lipped on any details, the company says it would work with established licensed producers and have already begun early talks on our side of the border.

Maser’s company launched four years ago with a hemp-based CBD beverage before most business or consumers were aware that weed could be consumed in a drink. Since then, their products have been on high-end grocers’ shelves in the state, even breaking through to a few 7-Eleven franchisees.

Thank you to the Daily Hive for the article. © 2019 Buzz Connected Media Inc.