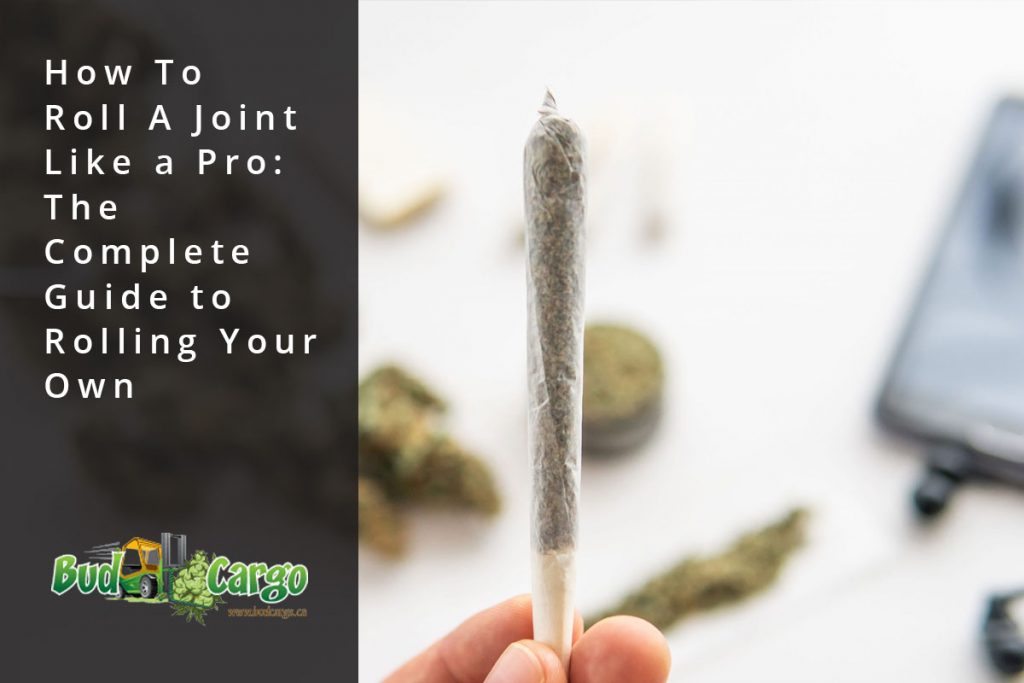 Whether you’re looking to enjoy a joint or you just want to learn how it’s done, there are plenty of good reasons to roll your own weed instead of buying it from a store. Fortunately, learning how to roll joints like a pro is easier than you think, and with just a little bit of guidance and practice, anyone can become an expert! Read on for all the tips you need to take your first joint-rolling foray into the wonderful world of homemade weed.

But if you’re like me and you don’t have the time and patience to roll a joint, Budcargo.net offers several pre-roll options for you to buy online.

What You’ll Need to Roll a Joint

First off, you’ll need some weed. You can get away with picking it up without a word of authority if you’re in a place where it’s legal to do so, but if you’re in a place where it isn’t legal to have weed, make sure you have permission first. But if you do have weed on hand, you can’t start rolling joints without it. Next, you’ll need some rolling paper. There are tons of varieties available these days, but the most common are either 80% or 100% hemp paper. 100% hemp paper is what you’ll use to make joints, while 80% hemp is good for blunts (take note, though, that it doesn’t hold up nearly as well for rolling joints as 100% hemp does). You can also use rice paper as a substitute for hemp paper, but it isn’t nearly as strong, so it doesn’t work nearly as well. Finally, you’ll need some rolling tobacco, which can be found at your local tobacco shop or grocery store. You’ll usually find it near cigarettes or cigars.

Set up your workspace

The first thing you want to do when you’re rolling joints is get yourself organized. Start by laying out all your ingredients and tools in one spot where you can see them. While you’re rolling joints, you’ll be constantly moving from one part of your workspace to the next, so it’s important to make it as easy as possible for yourself. Set out your rolling papers, your rolling tobacco, and your herb. If you’re using a rolling paper that’s 80% hemp, make sure you lay it out on a flat surface, so you don’t roll out the paper as you’re moving around. Next, you’ll want to set out your paper clips, your scissors, and your lighter. You’ll use the paper clips to clip the edges of the paper while you roll, the scissors to trim the rolled joints, and the lighter to flame the joint to draw it.

The best way to learn to roll joints like a pro is to start off with the basics and build up from there. That way, you’ll always have a solid foundation to work from, and you won’t run into any trouble or obstacles along the way. The most common joints are the Dutch (a cone-shaped joint), the joint (a small joint), and the spliff (a joint composed of a Dutch and a joint rolled into one). As you explore different joints, you’ll find you have a lot more options at your disposal, so don’t feel like you have to stick to the ones mentioned above.

There are countless variations and fillers available when it comes to rolling joints, including everything from strain-specific rolling papers to colored papers to add a pop of color to your joint. Be wary, though, of additives such as acetone, which can be dangerous and have harmful effects on your respiratory system. If you want to explore the different options available, some of the more common varieties and their uses are listed below:

Wrapping a joint like a pro means you have to learn the basics of each of the different joints. The first one you’ll learn is the rolling loop. This joint is most commonly used for rolling joints out of 100% hemp paper, and it’s a simple tube-shaped joint. It’s the easiest joint to roll, and it’s the most common joint found on the streets. This joint is easy to roll, but the trick, of course, is to get the rolling paper to stick to the hands when you’re rolling it up. The trick here is to rub your hands together for a few seconds and then press them into the paper, where you’ve already pressed the paper. This creates friction and causes the paper to stick.

The next joint you’ll learn how to make is the slim Jim (also commonly known as the “Slim Jim”). This joint is most commonly used for making joints out of 100% hemp paper and consists of rolling two small joints together. The slim Jim is great for quick and easy joints, but it lacks in the strength department, so you’ll have to take care when consuming them. The slim Jim is easy to make and easy to consume, but it doesn’t hold up as well for rolling, so you’ll have to take extra care when handling it.

The next joint you’ll learn how to make is the serpentine. This is most commonly used for making 100% hemp rolling papers and consists of rolling a joint, then unrolling it, and then rolling it again. The serpentine roll is a strong joint that can hold up for rolling and rolling again, but it lacks in the ease of use department and can be difficult to create. With the serpentine roll, you’ll have to unroll the joint, remove the paper, and then apply it again with your fingers. This may seem like it’s going to be difficult, but it actually isn’t that difficult with practice.

The next joint you’ll learn how to make is the hand-over-hand. This is most commonly used for making 100% hemp rolling papers and consists of rolling a joint, then unrolling it, and then rolling it again. The hand-over-hand joint is a strong joint that can hold up for rolling and rolling again, but it lacks in the ease of use department and is hard to create. With the hand-over-hand joint, you’ll have to remove the paper and roll it with your hands. This may seem like it’s going to be difficult, but it actually isn’t that difficult with practice.