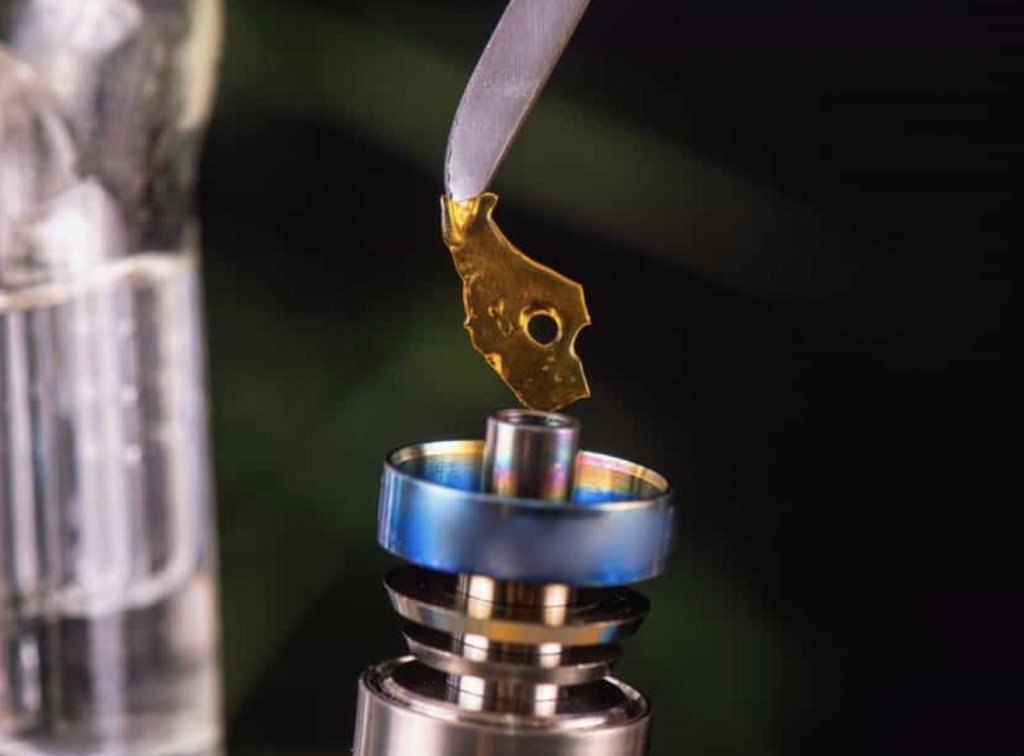 Learning how to smoke shatter is a skill every true cannaenthusiast should master.

Granted, shatter may not replace bud as your go-to method of marijuana consumption — and we’re not suggesting it should.

To help you in this regard, the all-things-cannabis experts at budcargo.ca have created this complete guide on how to smoke shatter. Think of it as your very own shatter driver’s manual.

Now hop behind the wheel, strap in, and let’s go for a ride.

Shatter is a translucent — sometimes transparent — concentrate that looks an awful lot like rock candy or a Jolly Rancher.

Professionals and adventurous DIYers make concentrates by “soaking” cannabis material in various solvents, such as:

The result of these efforts is an amber liquid that, once cooled, solidifies into a final product that often has the consistency of thin peanut brittle.

Shatter’s transparent quality results from the temperatures used during the extraction and finishing process (as well as other variables) and can only be described by some pretty heavy chemical jargon.

To put it in more relatable terms, think about the molecules in the concentrate (the amber liquid before it cools) as Lego bricks.

In shatter, the bricks all stack nice and neat, one on top of the other, as if you had just built a wall. This molecular alignment allows light to pass through and gives the shatter its brittleness.

What happens when the bricks aren’t stacked just so? Read on to find out.

The Difference Between Shatter And Wax

Cannabis concentrates take many forms and include:

So what’s the difference? Nothing, really.

Shatter, wax, honeycomb, crumble, and budder are all concentrates that have roughly the same THC or CBD potency.

They’re all primarily dabbed (more on that in the next section). And they all provide a powerful, long-lasting high. The only real difference is in their appearance and form.

While shatter is most often clear and brittle, wax looks and feels like cold coconut oil (more solid than liquid). Like shatter, this is due to the arrangement of molecules within the wax itself.

Because the Lego blocks are going every which way and have no semblance of organization, wax is opaque and has that coconut oil consistency.

The arrangement of molecules within the shatter and wax also gives rise to some other unique differences, including:

Now that we’ve introduced you to shatter and investigated what’s going on at the molecular level, let’s get to what you came here to find out: how to smoke shatter.

How To Smoke Shatter

If you ask 10 people how to smoke shatter, we bet that seven of those individuals will say “dab rig” — and they’re right.

Dabbing with a dab rig is the most common way to consume cannabis concentrates.

A dab rig is basically a special bong built to burn concentrates (like shatter and wax) instead of dried and cured bud.

Unlike a regular bong, though, a dab rig contains two important pieces that are essential for smoking shatter: a nail and a dome.

To make the dab rig work, you first heat the nail (typically with a blowtorch). Then you place the shatter on the hot nail and cover it with the dome (a spherical glass piece that fits over the nail).

The hot nail vaporizes the shatter (i.e., turns it into “smoke”) while the dome keeps all that good stuff from just floating off into space.

You then inhale through the mouth of the dab rig, drawing the vapor through the water chamber (if it has one) and into your lungs.

Some dab rigs also have a carb cap.

When placed over the hot nail after applying the shatter (instead of a dome), a carb cap creates a mini oven that allows you to vaporize the cannabis concentrate at lower temperatures.

Some dabbers feel that this method — vaporizing at lower temperatures — produces a smoother, more enjoyable experience.

Try both ways and decide for yourself.

Thankfully, the dab rig isn’t the only way to have fun with cannabis concentrates — there are other ways to learn how to smoke shatter.

One of the easiest and most accessible methods is to include a bit of shatter in your joint, blunt, or spliff.

This works well if you’re rolling your own product, but with a little effort, you can also add shatter to pre-rolled blunts and joints.

If you’re rolling a joint or blunt (or even a cross joint) from scratch, break your shatter into small pieces and sprinkle three or four into the bud before you close.

If you’ve purchased a product from a local dispensary and want to add a concentrate kick to the mix, you’ll have to deconstruct the joint, blunt, or spliff; sprinkle in the shatter; and then reroll everything together in order to smoke it.

Another simple method for learning how to smoke shatter — without an expensive dab rig — involves everyone’s favorite: the bong.

Here’s how to smoke shatter with this common cannabis tool:

Surrounding the shatter with ground marijuana keeps the flame of your lighter from coming in contact with the cannabis concentrate and ruining it completely.

Instead, the heat from the burning ganja (which is cooler than the naked flame) vaporizes the shatter while preserving a vast majority of the cannabinoids within its chemical structure.

Some vape pens also have the capability to vaporize shatter, but be sure to read the specs before you buy.

The more expensive ones allow you to increase or decrease the heat in order to vaporize different types of concentrates, including shatter.

These types of vape pens are complicated — there are multiple settings you have to tweak before you can smoke — have a steep learning curve, and require lots of practice to master.

Vape pens are certainly an option, but learning how to smoke shatter in a joint or bong is a better use of your valuable time.

What To Expect When You Smoke Shatter

Shatter is a very potent form of marijuana.

Some shatter weighs in at a whopping 80 percent THC (and sometimes even higher). That’s more than three times some of the strongest strains of traditional marijuana.

That much power in such a small package can make for an extremely interesting experience.

If it’s your first, second, or even third time smoking shatter, don’t inhale too deeply or hold the vapor overly long in your lungs. That way, you won’t get too much THC in a single breath and set yourself up for a bad trip.

At the very least, stand up slowly until you get your “ganja legs” (a close relative of “sea legs”) so you don’t suddenly find yourself on the floor — or clinging to the wall — with no idea how you got there.

Our best advice: start small and take it slow. That’s just a good idea any time you try a new form of cannabis.

How To Smoke Shatter: Purchase From The Professionals

Sure, technically, you could cook up a batch of shatter in your kitchen, just like you could technically build your own house. But why not leave it to the professionals?

They’ve got the experience and the know-how to do it right. Plus, you’ll get a better-quality, safer product. And the finished product will be more concentrated, so just a little will go quite a bit further.

At budcargo.ca, we create a 100 percent organic shatter using the highest-quality strains available on the market today.

Because we only use the purest marijuana in our shatter, you can feel safe in the knowledge that you’re not consuming any harmful substances.

That’s peace of mind along with a really great high. What more could you ask for from the marijuana experience? Nothing that we can think of.

For more information on all things cannabis and to check out our 100-percent all-natural marijuana products, visit budcargo.ca today.