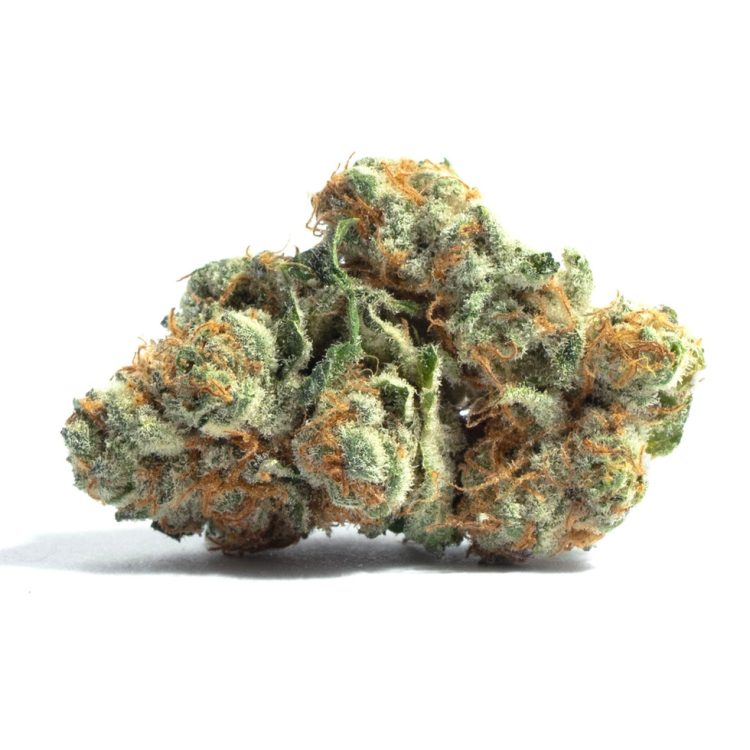 Mob Boss is marked by small to medium buds that have a somewhat tapered, conical shape.

The buds are very dense when properly cured, with the green leaves tightly coiling in on themselves. Red hairs — which really should be pistils because they’re designed for catching pollen from fertilizing males plants-—are threaded through these beautiful cannabis blossoms .

These already-colorful flowers are covered in trichomes, lending them a silvery and moist-looking sheen. As one would expect from the name “Mob Boss,” these buds can be very sticky so they’re best broken up without using any kind of grinder! The smell is quite noticeable at first – sweet citrus jumps off your nose while herbal notes lurk just underneath that fresh fragrance like an ambush waiting for you to take another sniff before submitting yourself into its trap once again. Breaking open or combusting the flower gives off more harsh aromas such as musky odor which unfortunately becomes all too familiar with this strain’s smoke because coughs often result when inhaling deeply.

One fun fact about cannabis, in general, is that their names can be very interesting. Some have names inspired by their parent strains while others tend to be unique and are definitely way cooler!

The Mob Boss strain is a perfect name for those who want to be in charge. This powerful marijuana has strong cerebral and physical effects that will leave you feeling like the boss of your world!

This strain has lived up to its seemingly tough name. It is known for being highly potent with overwhelming effects, and it’s one of those that beginners should not be messing around without precautions!

To give you a clearer picture of this strain’s most notable attributes, check out the following information below.

The Mob Boss is a hybrid strain that resulted from crossing Chemdawg and Tang tang. It was first developed in 2009 by the Grindhouse Medical Seeds in California, but it’s popularity has since spread throughout North America .

The strain has two different phenotypes which may vary in their potency and effects. However, Mob Boss is well-known for its strong marijuana with high levels of resin production.

The THC content in this strain is 18%, but it has been known to go as high at 24%. This data should tell us that the potency of Mob Boss can be very lethal.

As a Sativa-dominant strain, you can expect it to give off strong head high. However this effect depends on the specific phenotype of your plant – some could be much lighter while others may feel overwhelmingly heavy with THC content.

The cerebral effect of the Mob Boss can cause feelings of euphoria, happiness and heightens one’s senses. The latter may also be a bit psychedelic for some who result in visual distortions or time dilation but it is helpful when consumed in moderation since they help with problem-solving (when taken).

The physical high of the Mob Boss is not as intense or long-lasting, but can still provide that same sense of relaxation.

It is important to note that the smoke of this strain could be harsh and even cause coughing especially for beginners. It might also sting your eyes or make you cough, but it will give you some serious relaxation once smoked!

Based on its effects, the strain is recommended for afternoon or evening use.

The Mob Boss has a light and sweet floral scent with an understated lemony aroma that’s favorable for the senses.

This strain is associated with a variety of different flavors, including sweet and sour. Some find it more pungent while others notice lemon or citrus notes on their exhale during inhalation.

The Mob Boss strain is not only popular for its potency, but also because it has significant medicinal value. For medical cannabis users looking to relieve muscle tension and spasms, inflammation headaches or migraines this sativa-dominant hybrid will be sure to come through!

This strain is also highly popular among those who are going through depressions, and the powerful mental high that subsides as a sedative property relaxes your body can help reduce anxiety. Indirectly this might offer relief from symptoms of PTSD or even PMS for some people.

As the effects of the strain subside, consumers are likely to feel hungry. For that reason, the Mob Boss could very well be an insomniac’s best friend.