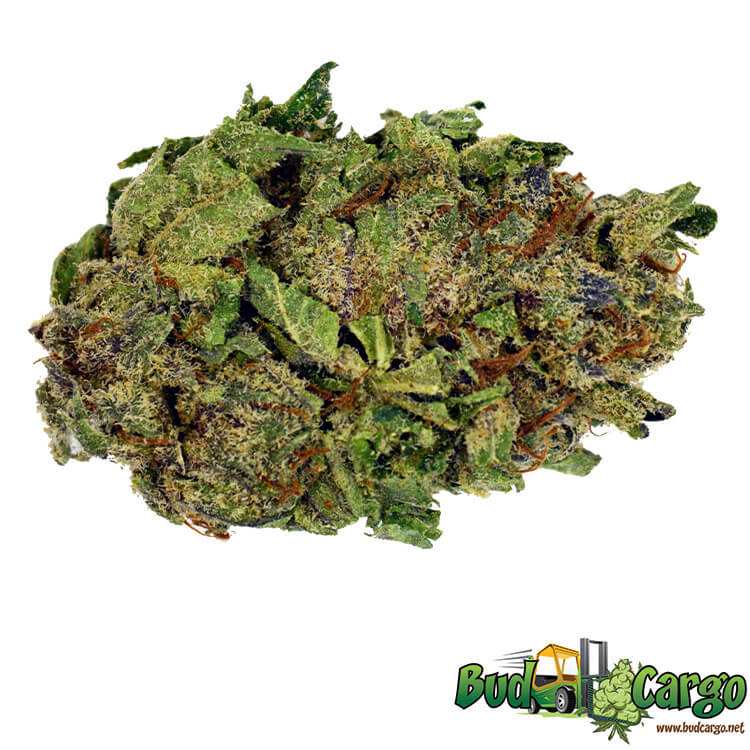 Purple Candy is an indulgent indica-dominant hybrid with eye-catching flowers and a deeply therapeutic body high. This strain was created by British Columbia-based breeders BC Bud Depot — who have also given us God Bud and Optimus Prime — as a cross between their own Sweet Tooth and colorful Northern California favorite Mendocino Purps. As resinous as it is colorful, this bud can be a potent smoke, even for cannabis veterans. Its THC content has been measured at between 15% and 19%.

Purple Candy is an indulgent indica-dominant hybrid with eye-catching flowers and a deeply therapeutic body high. As resinous as it is colorful, this bud can be a potent smoke, even for cannabis veterans.

Purple Candy distinguishes itself with large, multicolored flowers. These buds tend to be large, holding together in thick and tapered formations, almost like miniature pinecones. The squat and compact flowers have an indica-type structure, as their relatively small leaves overlap and coil tightly inward toward their central stems. The leaves themselves are a dark shade of forest green and often also show patches of purple. These purple hues are due to the presence of pigments called anthocyanins, passed on from parent strain Mendocino Purps. Finally, these already-colorful nuggets are encrusted with cloudy white trichomes that make them very sticky and account for their high psychoactivity.

When properly cured, Purple Candy’s flowers burst with a sweet berry and grape aroma. There are almost some woody base notes of pine. Grinding up the buds gives off pronounced musky and earthy odors. When combusted in a pipe or a joint, Purple Candy burns with a smooth and easily palatable smoke. True to its name, the strain has a sugary, candy-like character with mouth-puckering fruit flavor on the exhale.

Purple Candy can have a slow, creeping high, sometimes taking several minutes after users have toked to reveal its presence. A concerted pressure around the eyes and temples is one of the first signs that the strain is taking effect. There can also be some changes in the senses — visual and auditory distortions are often reported, as is a sense of time passing more slowly. The strain’s energy may be thoughtful as first. Smokers can be decidedly introspective, putting their thoughts and problems into perspective. This cerebral high can also point itself toward any work that may be on a day’s agenda; Purple Candy’s high may be good for analytical, problem-solvings, as well as for more open-ended creative brainstorming sessions. As the high whiles itself away, the strain’s relaxing indica side reveals itself. A tingle begins to roll down from the neck and radiate outward through the core and limbs. At this point, it can be fun to kick back and get some pleasure reading done or catch up on TV shows. Purple Candy’s ever-present sativa edge may also inspire chattiness and camaraderie if the strain is consumed in social settings. You don’t need any specific plans to enjoy this potent bud, though — just relax and let slow waves of euphoria wash over you. As dosage is increased, couchlock becomes more of a possibility, squelching any prior motivation to get up and move. Under the right conditions, it can be easy to drift off to sleep while under Purple Candy’s spell.

Purple Candy’s versatile effects can also have several applications for medical cannabis patients. The strain’s mood-lifting properties may temporarily improve symptoms of stress, depression, and anxiety. Its thorough body high can also numb pain, whether it’s chronic, as due to conditions like lupus and arthritis, or temporary, as due to injury. Some anti-inflammatory effects can take care of everyday irritations like headaches and nausea. As noted, Purple Candy can also be an effective antidote to insomnia. Because it is unlikely to trigger the intense cerebral energy that comes with more sativa-dominant strains, Purple Candy can be a good option for patients who are prone to panic or who have a low THC tolerance.

A treat for the eyes, palate, and mind, Purple Candy is an all-around winner for fans of indica-inflected strains. If you break it out in social settings, be prepared for its fragrant smoke to attract some attention.