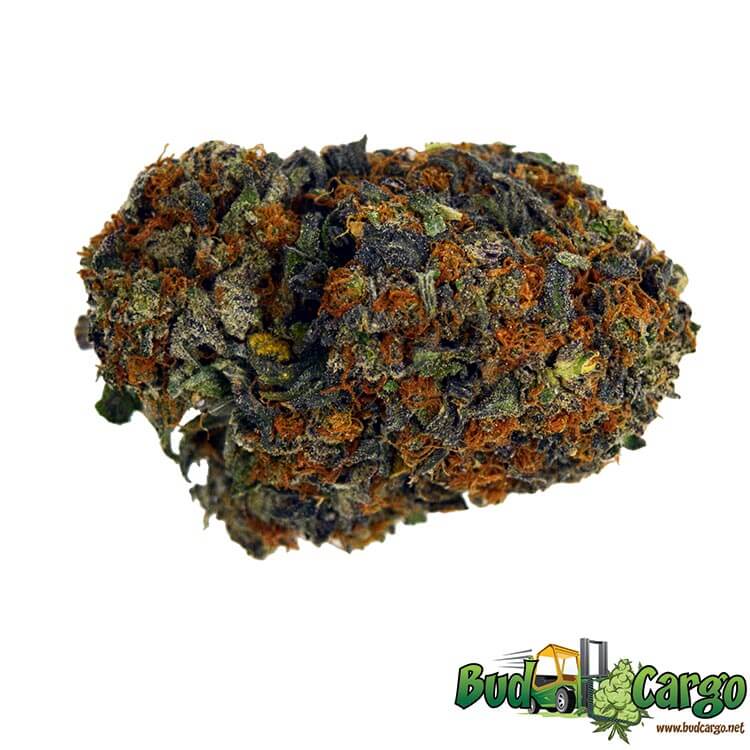 Night Train is an indica-dominant hybrid with the sedative power to rock you to sleep like a train speeding you home under dark skies. Created by California-based Elemental Wellness, this strain is a cross between aromatic Jasmine and sativa powerhouse Trainwreck. It offers a memorably spicy flavor profile alongside some deeply soothing physical effects. This strain’s THC content has been measured at between 9% and 23%.

Night Train is an indica-dominant hybrid with the sedative power to rock you to sleep like a train speeding you home under dark skies. Created by California-based Elemental Wellness, this strain is a cross between aromatic Jasmine and sativa powerhouse Trainwreck.

It offers a memorably spicy flavor profile alongside some deeply soothing physical effects.

Night Train is marked by large flowers that adhere in thick, solid pieces. These buds have an elongated, cylindrical shape and hold the densely-packed structure usually associated with other indica varieties. Its leaves are a bright shade of spring green and are twisted through with curly yellow and orange hairs — which are actually pistils, structure meant to catch pollen from would-be fertilizing male plants. Finally, a coating of translucent amber trichomes covers the inner and outer surfaces and nooks of these buds, making them both very potent and very sticky.

When properly cured, Night Train gives off a distinctly spicy, acrid scent. On closer inspection, there are some dank notes of damp earth and skunk as well.

Meanwhile, grinding up Night Train’s buds releases an astringent chemical scent, reminiscent of ammonia-based cleaning products. When combusted in a pipe or a joint, this strain gives off a harsh smoke that may induce coughing or watery eyes for some. On the exhale, it leaves behind pungent fumes of pepper and skunk.

Night Train’s high hits quickly, considering that it is an indica-leaning strain. Initial effects may manifest as a throbbing pressure around the temples and forehead. This feeling is followed by changes in sensory experience.

These may range from an intensification of certain sights and sounds to trippy sensations of time dilation or depth perception. As smokers adjust, they are able to ease into these psychedelic effects and supplement them with visually-engaging movies or atmospheric music. Although Night Train comes with some slight increase in cerebral activity, this is nowhere on the order of parent strain Trainwreck and is unlikely to lead to mindrace.

Instead, the main attraction here is the body high, which progressively creeps down the spine and through the core and limbs, radiating waves of easy relaxation. At this point, users feel a decrease in any lingering physical tension, as well as an increased capacity for deep breathing. Because of its unfocused, lazy properties, this is not a strain to enjoy before tackling a pile of work or kicking off a busy agenda. Instead, share Night Train with some like-minded friends in order to spread calm, happy vibes.

Alternatively, enjoy this indica alone for some introspective “me time.” As dosage is increased, note that this bud is likely to bring about couchlock, and eventually, sleep. As its name suggests, Night Train should be savored at night, or just before bed.

This calming, almost narcotic bud can also have several applications for medical cannabis patients. It can temporarily take the edge off of the unpleasant symptoms of stress, depression, and anxiety. It may also soothe physical pain, whether it’s chronic and disease-related or more mundane, like a headache. As noted, Night Train is also able to lull users to sleep and may be a welcome antidote to insomnia. Because it is unlikely to bring about the kind of intense, recursive thinking that can lead to paranoia, this strain is a good option for those who are prone to panic or have a low tolerance for THC.

Night Train is a heavy, stony indica that’s sure to appeal to cannabis newcomers and veterans alike. Somewhat difficult to come by, it’s worth snatching up for its pleasantly sedative effects.