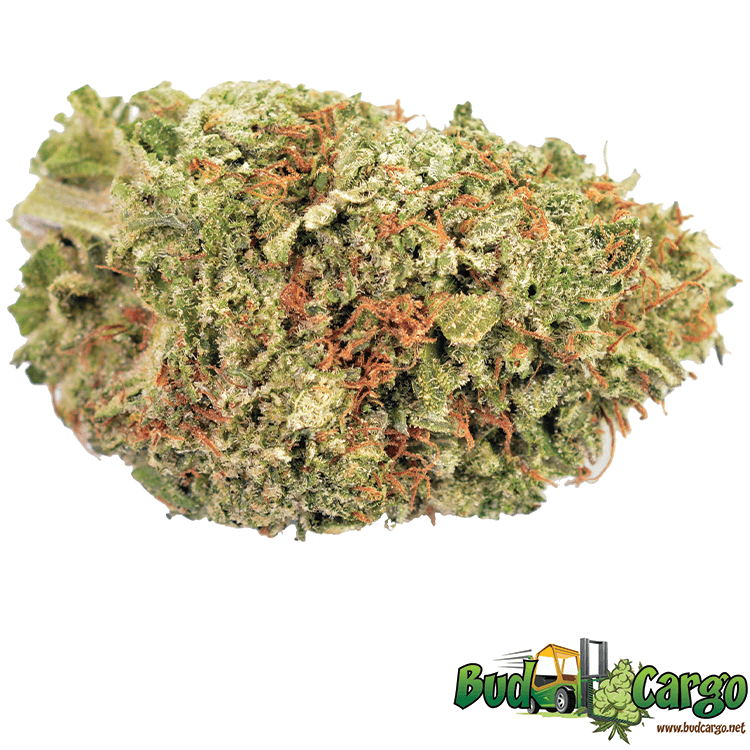 Phantom OG is an indica-leaning strain that offers an ideal balance of physical and mental stimulation. This bud is the brainchild of prolific growers Barney’s Farm as a cross between OG Kush and Phantom Cookies. The resulting bud has won fans for its bright, punchy flavor and its unique high. Phantom OG’s THC content has been measured at levels from 19% to 26%/

Trimmed buds of Phantom OG are marked by a medium to large size and a tapered, pinecone-like formation. The flowers have a characteristically indica appearance, with a dense core comprised of small, tightly-curled leaves. These leaves show off various shades of green, accented by the occasional flash of purple. Finally, Phantom OG’s flowers are capped off by ghostly white trichomes and curly orange and yellow pistils.

When properly cured, Phantom OG’s flowers give off a mostly earthy aroma, with hints of fresh pine needles. A second whiff of these buds may also pick up on some tangy lemon. When these nuggets are broken apart or ground open, however, they emit a more aggressive, skunky odor. Despite these bold flavors, though, Phantom OG burns with a surprisingly smooth smoke when combusted in a pipe or a joint. On the exhale, this rich strain tastes of pine and citrus and leaves behind the general impression of artificially-scented wood polish.

The high from Phantom OG tends to creep up on the smoker, sometimes requiring 10 or 15 minutes after consumption to begin to reveal itself. Initially, users may feel an increased blood pressure near the eyes or temples as well as some flushing in the cheeks. Once these strange sensations die down, though, consumers may notice that their train of thought is moving more quickly than usual. Certain ideas or concepts that might not otherwise seem worthwhile may suddenly occupy the smoker’s attention; similarly, some smokers might find themselves grouping thoughts into categories and forming new associations. This kind of plugged-in thinking can allow for concentration on complicated or analytical tasks. It may also lift inhibitions on creativity, inspiring work on open-ended creative projects. In social settings, Phantom OG’s mental stimulation can even spill over into lively conversation, even when used among relative strangers.

After some time, Phantom OG introduces a physical high to temper its cerebral effects. Relaxation may trickle down the neck and spread through the spine and core, leading consumers to breathe more deeply and easily. Any smokers who may have been out and about may find themselves rushing for the comfort of home as sedation begins to slow them down. Although mental lucidity and concentration are still possible as this point, Phantom OG’s pronounced indica effects render productivity mostly unappealing. Instead, enjoy this strain’s more relaxing second phase while kicking back with a movie or a drink.

Phantom OG’s combination of mental and physical properties can have several uses for medical cannabis patients. As noted, it can aid concentration, making it of use to those with attention deficit disorder. The strain’s mood-boosting effets can also temporarily work against the symptoms of mild to moderate stress and depression. Physically speaking, Phantom OG can dull aches and pain, both mild and chronic, and can lessen the severity of everyday irritations like headaches. This bud’s tendency to induce the munchies can even enhance appetite for patients dealing with diminished hunger due to disease or to treatment like chemotherapy. However, because it can result in some paranoid and obsessive patterns of thinking in the wrong set and setting, Phantom OG is not recommended for patients who are inexperienced with THC or who are prone to panic.