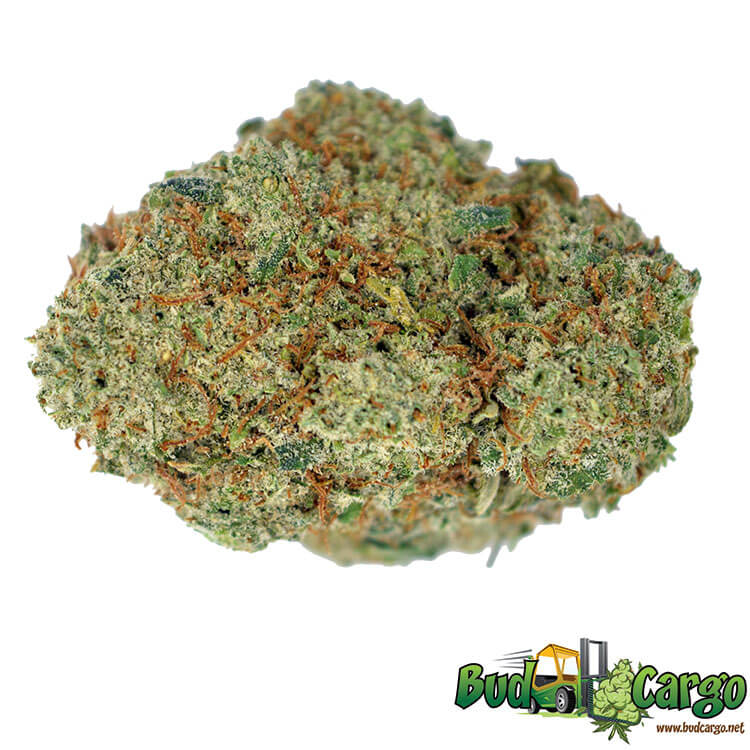 Black D.O.G. is an indica-heavy hybrid that has its origins in California’s fertile Humboldt County. The creation of Humboldt Seed Organization, Black D.O.G. is a combination of Emerald Headband and the flavorful Blackberry Kush. It offers a complex flavor profile alongside a thorough body stone. Definitely, a strain that’s best reserved for laidback evening use.

Black D.O.G.’s flowers are medium to large in size and cling together in elongated, almost cylindrical shapes. These buds have a seemingly hybridized internal structure, with the dense center characteristic of indica varieties but with long, feathery leaves that have more of a sativa character. The leaves themselves are a bright shade of spring green and are wound through with a high concentration of curly orange pistils. Translucent white trichomes finish off these flowers, accounting for their psychoactivity and making them very sticky to the touch.

When properly cured, Black D.O.G. gives off a predominantly woodsy, earthy scent with hints of fresh pine. A deeper whiff may pick up on some fruity accents lurking underneath. Grinding up these buds, meanwhile, yields a deeply musky odor that pays tribute to this strain’s Kush roots. When it is combusted in a pipe or joint, Black D.O.G. burns with a smooth and refreshing smoke that’s typically easy to inhale. On the exhale, this smoke mingles flavors of citrus and pine.

Like many other indica-dominant strains, Black D.O.G. can be a creeper that requires several minutes before its effects become apparent. As such, impatient consumers are advised to wait for 15 minutes or so before increase their dosage. Eventually, the high arrives with a concerted feeling of pressure around the temples and lower forehead (the so-called “headband” effect for which parent strain Emerald Headband is named). As smokers become accustomed to this odd sensations, they may become aware of some changes in cognition and sensory perception. Ideas may seem to take on a new intensity or may move more quickly than usual. At the same time, consumers may be prone to slight visual or auditory distortions and may experience strange phenomena like a feeling of time dilation. Those who are so inclined can push these trippy properties even further with some moody lighting or atmospheric music.

As this high wears on, Black D.O.G.’s physical effects, at first only subtle, may progress into a heavy body stone. Limbs and eyelids may be weighed down in equal measure and any extended physical activity might require more effort than usual. Although Black D.O.G.’s initial mental high may persist, smokers may be stripped of some of their earlier energy and motivation. As such, this strain’s later phase is best suited to kicking back with likeminded friends while indulging in passive activities like binge-watching or snacking. Because of its mostly downbeat, sedated vibe, Black D.O.G. is recommended for nighttime consumption.

Black D.O.G.’s relaxing and embodied effects can have several benefits for medical cannabis patients as well. Its cerebral onset can bring some measure of focus to those with attention deficit disorders. Additionally, its constant euphoria can alleviate the symptoms of stress, depression, and anxiety. Physically speaking, Black D.O.G. may be a balm for all kinds of aches and pains, both temporary and chronic. The strain’s headband-like feeling of pressure may be a particularly good way to relieve the intraocular pain associated with eye conditions like glaucoma. In properly relaxed conditions, Black D.O.G. may even counteract insomnia, lulling smokers into a heavy sleep. Because it comes with an elevated risk of paranoia and disorientation, Black D.O.G. should be consumed with some caution and moderation by patients who have a low THC tolerance.

Black D.O.G.’s deeply relaxing high is a great way to wind down after a stressful day of work. It’s as enjoyable savored alone as it is when shared with friends.