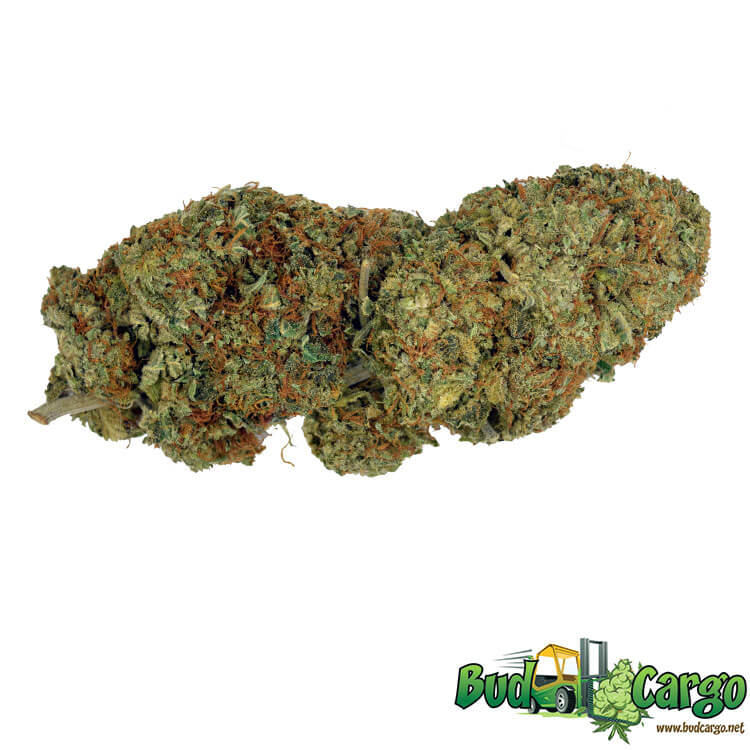 Headband is an iconic indica hybrid that draws on some solid cannabis genetics to offer buds with visual “bag appeal” and a potent stoney high. Although the name Headband may conjure up images of hippies in decorative headgear, it actually refers to the sensation of pressure that builds up around the user’s temples as this strain’s THC dilates blood vessels in the face.

Headband is a cross between staple strains OG Kush, Master Kush, and Sour Diesel. All of these indica heavy hitters endow Headband with a high THC content — it has been measured at between 20% and an impressive 27%. Some sources claim that Headband was developed by Colorado-based breeders Reserva Privada — who are also responsible for tasty strains like Kandy Kush and Strawberry Banana. Still others attest to an origin in 707 Headband, a grassroots strain developed in the cannabis promised land of Humboldt County, California; breeders DNA Genetics claim to have studied this “707” strain and recreated its likely genetic profile to produce Headband.

Buds of Headband are small and are more like nuggets than dense, spade-like cones. The leaves are an even, pale green, although some plant phenotypes have a higher propensity for shades of purple (the result of cold temperatures activating anthocyanin compounds during the vegetative period).

As might be expected of a strain with such high THC, Headband flowers are covered in silvery-white trichomes and are sticky to the touch — this is one strain that proves difficult to breakup for joints or pipes without using a grinder. The initial smell of the cured flowers is tangy and lemony. Underneath these dominant scents is a faint skunkiness, along with some notes of pine. Unlike some other indicas — particularly OGs — Headband produces smoke that is thick but surprisingly smooth. This smoke has a rounded, creamy mouthfeel and tastes citrusy when inhaled. On the exhale, a more diesel, chemical funk is present. The overall taste sensation is of lemon-scented cleaning fluid that hits the user at the front of the palate.

The high from Headband mounts slowly, with some users reporting that they may not notice effects for up to 20 minutes after consuming. With very little sativa effects, Headband induces a spacey, foggy state that makes it poorly suited to tasks that require focus and mental acuity. In addition to this fogginess, Headband gives users a physically weighty feeling that spreads down through the spine and radiates out to the limbs, comfortably locking them into supine position. This sense of couchlock makes Headband ideal for passive activities in comfortable surroundings, like watching movies or listening to music. It could also serve as inspiration for some general creative thinking. The psychedelic sense of disconnection from one’s own body makes Headband a potential aphrodisiac as well.

Medically speaking, Headband’s powerful sedative properties serve as a remedy for mild anxiety and, in large enough doses, for chronic insomnia. Fans of the strain have also reported improvement in symptoms associated with migraines and muscle spasms. Headband has been known to provoke appetite, making it a supplementary treatment for users suffering from decreased hunger due to disease or chemotherapy. Negative side effects include a feeling of dizziness, drymouth, and — thanks to the same expansion of blood vessels that causes this strain’s trademark facial pressure — red eyes. The high from Headband is said to last longer than average, even in users with a relatively high tolerance for THC.

Headband is a potent strain that will please cannabis novices and enthusiasts alike. Providing the best of what indicas have to offer, it’s a surefire path to relaxation, mild creativity, and an overall trippy good time, either alone or in the company of good friends. Although it has an appealing citrus flavor, this novelty doesn’t come at the expense of genetic stability or potency as with many new crossbreeds in the cannabis market today. Headband’s high trichome composition also makes it an easy choice for the production of hash and other THC concentrates.